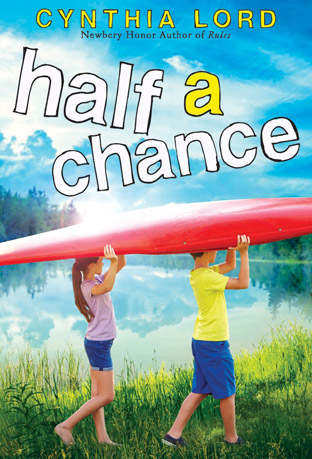 Photo Scavenger Hunt!  Take one photo that best shows each of the following words or phrases. Be creative!

When Lucy's family moves to an old house on a lake, Lucy tries to see her new home through her camera's lens, as her father has taught her—he's a famous photographer, away on a shoot. Will her photos ever meet his high standards? When she discovers that he's judging a photo contest, Lucy decides to enter anonymously. She wants to find out if her eye for photography is really special—or only good enough.

As she seeks out subjects for her photos, Lucy gets to know Nate, the boy next door. But slowly the camera reveals what Nate doesn't want to see: his grandmother's memory is slipping away, and with it much of what he cherishes about his summers on the lake. This summer, Nate will learn about the power of art to show truth. And Lucy will learn how beauty can change lives . . . including her own.

"As deceptively quiet in tone as its New Hampshire lakeside setting, this affecting book affirms the power of art as it tackles profound issues of loss, memory, aging, belonging and the inevitability of change.... With winning results, Lord brings the same sensitivity to the subject of dementia that she brought to autism in her Newbery Honor book, Rules."  Kirkus (starred review)

Newbery Honor winner Lord (Rules, Scholastic, 2006) has combined vivid, cinematic description with deft characterization and handles several important issues with sensitivity, nuance, and great skill.... Readers will be absorbed in the well-paced plot, sympathize with the concerns of a likable protagonist, learn a bit about photography, and consider the impetus of using one's creative talent for good or ill. A deeply enjoyable read."  School Library Journal (starred review)

"Lord offers a tender treatment of early adolescent needs and struggles in this thoughtful coming-of-age novel. The book sensitively depicts the complicated feelings and competing desires that afflict even ostensibly happy, middle-class families, understanding that things can be painfully amiss even when nothing big is wrong.... Put this poignant and restrained novel in the hands of a preteen girl who has it all, or just seems to."  Bulletin of the Center for Children's Books (starred review)

"Filled with moments of discovery, wonder, and sorrow, Lord's story captures Lucy's artistic sensibility and photographer's eye, as well as her compassion for both animals and people. Through Lucy's thoughts and actions, Lord (Rules) elegantly conveys how complex stories can be told through moments frozen in time."  Publisher's Weekly

"Readers will find themselves caught up in sensitive Lucy's honest and thoughtful narration."  Horn Book

"Newbery Honor winner Cynthia Lord (Rules) creatively weaves a touching story and tackles important issues for this age group, including isolation and the complexities of friendship. It also introduces Alzheimer's disease in an understated and uniquely understandable way. During an unforgettable summer in New Hampshire, set against the backdrop of the photography contest, Lucy learns about the roots of family, the ties of loyalty, the power of storytelling and what it means to be a true friend."  BookPage

"This lovely novel draws readers in with an appealing story of a lonely girl who simultaneously longs for peer acceptance and for the recognition of a parent. Lucy's narration is believable, humorous, and beautifully reflective, encouraging readers to notice the small moments of wonder around them, both in their natural surroundings and in the humans in their lives."  Parents' Choice Foundation

"This is another winning middle-grade novel by Newbery Honor-winning author Cynthia Lord. . . .The book establishes a vivid sense of place and deals with difficult issues like dementia in a thoughtful and moving way."  Christian Science Monitor

"Much like Cynthia Lord's other middle grade novels, this book is beautifully written and full of emotion. Readers will instantly identify with Lucy, fall in love with the endangered loons, and feel for Grandma Lilah. Highly recommended."  Library Media Connection