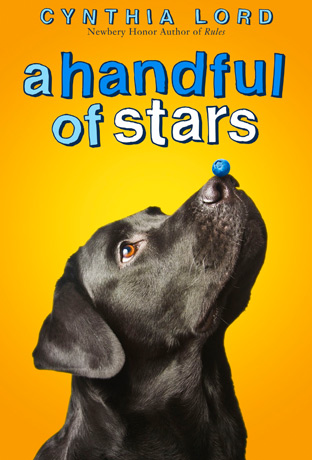 A Handful of Stars

Available at your local bookstore or
IndieBound  Amazon   B&N

A Handful of Stars

The only reason I ever spoke to Salma Santiago was because my dog ate her lunch.

Sometimes life is like a long road leading from one "if" to another. If Lucky hadn't slipped out of his collar, I wouldn't have been running across the blueberry barrens in late July, yelling, "Lucky! No! Come! Treats!" trying every phrase that dog knew, praying one of them would slow him down long enough for me to grab him.

"Leash! Bacon! Go for a ride? Cheese!" But for a blind, old, black Labrador retriever, Lucky's really fast. Especially on those wide-open barrens where there's nothing to bump into and every which way to go.

This powerful middle-grade novel from the Newbery Honor author of RULES explores a friendship between a small-town girl and the daughter of migrant workers.

When Lily's blind dog, Lucky, slips his collar and runs away across the wide-open blueberry barrens of eastern Maine, it's Salma Santiago who manages to catch him. Salma, the daughter of migrant workers, is in the small town with her family for the blueberry-picking season.

After their initial chance meeting, Salma and Lily bond over painting bee boxes for Lily's grandfather, and Salma's friendship transforms Lily's summer. But when Salma decides to run in the upcoming Blueberry Queen pageant, they'll have to face some tough truths about friendship and belonging. Should an outsider like Salma really participate in the pageant—and possibly win?

Set amongst the blueberry barrens and by the sea, this is a gorgeous new novel by Newbery Honor author Cynthia Lord that tackles themes of prejudice and friendship, loss and love.

Children's Choices, Best of the Year List of the Children's Book Council

Boston Globe Pick of the Week

"Lord links images beautifully: Lily shows Salma how the fluted top of a blueberry resembles a star, and Salma confides that she is comforted knowing that the stars overhead are the same ones shining on her loved ones far away. Salma's artistic creativity and gumption awaken Lily to the power of imagination, the importance of embracing change and knowing when to let go of the past, and the rewards of venturing beyond one's comfort zone."  Publisher's Weekly (starred review)

"Highly suitable for a readaloud as well as reading alone."  Bulletin of the Center for Children's Books (starred review)

"Lily's likable voice believably discloses her maturing awareness of the limitations she's built around herself while also offering an accurate and appreciative depiction of a unique setting: the blueberry barrens of Downeast Maine. This sensitive coming-of-age tale compassionately explores prejudice and multiculturalism."  Kirkus Reviews

"A story that centers more on family, friendship, and growing pains. A thoughtful work that examines cultural bias and will spark discussion."  School Library Journal

"Lily and Salma exhibit a mutually supportive friendship that is often missing from stories about girls."  Bookpage

"Lord paints vivid descriptions of the town, making it easy to picture the vast blueberry fields, colorful bee houses, and bustling general store. Her richly drawn characters are believable and likable, and it's not tough to want to see everyone come out a winner. A Handful of Stars is geared toward kids ages 8 to 12, and is perfect for independent readers as well as reading aloud at bedtime."  Washington Post