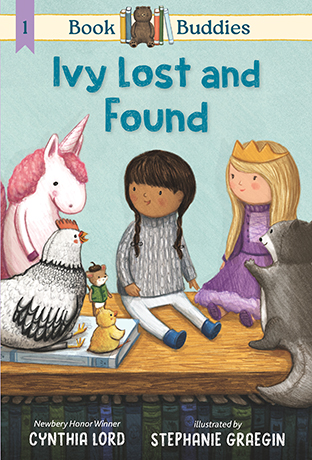 Also available as an audiobook and in ebook formats including Kindle, Nook, Kobo, iBook, and Google Play.

My First Book Club brochure from Candlewick Press including discussion questions and activities for Ivy, Lost and Found.

Click here for discussion Questions for Ivy Lost and Found.

"I don't know if anyone will come," Ivy said, "so let's save ourselves."

"You're a flying squirrel, right?" Ivy said. "That means you can fly!"

Ivy nodded. "Down is where we want to go."

A lonely doll helps a child adjust to a blended family in the first of the Book Buddies series about library toys and the children who borrow them.

Ivy was Anne the librarian's doll when she was a young girl. But now she has moved to Anne's library to be its newest Book Buddy—a toy that can be checked out just like a book.

Ivy isn't sure she wants to be borrowed, though. She'd rather go back to just being Anne's favorite toy. Fern, a child who visits the library with her stepfamily, also wishes things could go back to the way they were, when Fern had her dad all to herself. When Fern takes Ivy home, an unexpected outdoor adventure helps both of them find confidence and belonging in their changing worlds.

This heartwarming story by Cynthia Lord, with a classic feel and gentle illustrations by Stephanie Graegin, is the first in a chapter-book series that pairs friendly toys with child characters who need them.

A Best Book of the Year, Bank Street College of Education

"...an engaging story of insecurity overcome by hope, courage, and love.... A beguiling debut for this transitional chapter book series."  Booklist (starred review)

"Humorous, lively conversations between the Book Buddies—who include a sparkly, pink-tailed, deep-voiced unicorn ('Dazzle is a boy') and Roger, a chick whose adventures include falling into a (clean) toilet and narrowly avoiding being buried by a dog—offer the promise of happy borrowings ahead."  Publishers Weekly

"A beguiling series opener that gently conveys the upside of adapting to unwelcome changes."  Kirkus Reviews