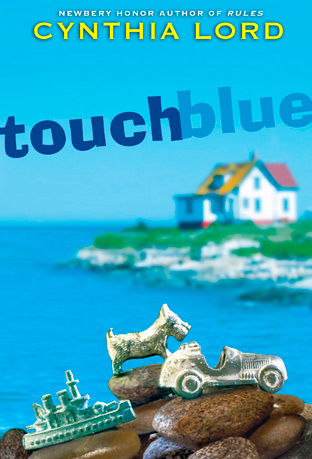 Never whistle on a boat.

A rainbow means change is coming.

It's bad luck to change a boat's name.

If you write your wish beneath the stamp on a letter, the letter will carry the wish with it.

Start your journey with your right foot and good luck will walk with you.

Touch Blue and your wish will come true.

Eleven-year-old Tess doesn't want to leave her island home, but the state of Maine plans to shut down the island's schoolhouse, which would force Tess's family to move to the mainland—and Tess to leave the only home she has ever known. Fortunately, the islanders have a plan too: increase the numbers of students by having several families take in foster children. So now Tess and her family are taking a chance on Aaron, a thirteen-year-old trumpet player who has been bounced from home to home. And Tess needs a plan of her own—and all the luck she can muster. Will Tess's wish come true or will her luck run out?

Newbery Honor author Cynthia Lord offers a warm-hearted, humorous, and thoughtful look at what it means to belong—and how lucky we feel when we do. Touch Blue, sure as certain, will touch your heart.

"Features a thoughtful first-person narration by Tess that gives readers a real feeling for island life, with vivid descriptions of the sights and sounds and smells of the place Tess loves and desperately doesn't want to leave."  Horn Book (starred review)

"Realistic characters, humor, and a charming setting make this a great choice for collections of all sizes."  Kirkus Reviews

"The tight-knit community and lobster-catching details make for a warm, colorful environment. This is a feel good story about letting go of your expectations and accepting the good things already in front of you."  Booklist

"Lord interlaces themes of loss, luck, superstition, family, and belonging, but at the heart of this tightly woven story is Tess's longing to help Aaron overcome his hurt and anger at having been taken from his alcoholic mother (years before) and shuffled among foster homes, and to make him feel like he's part of her close-knit family."  Publishers Weekly

"Each chapter opens with a different saying that is used in the context of the story, which keeps readers guessing about its significance. They will feel an enormous amount of hope as they read Tess and Aaron's story.  It delivers the message that everything happens for a reason, and that sometimes all you need to do is believe."  School Library Journal

"Touch Blue is a great novel about new beginnings, family and friendship. Plus, readers will learn tons of cool facts about the ocean, islands and boats! (Psst, did you know that an island is the top of an underwater mountain? Too cool!)?"  Girl's Life